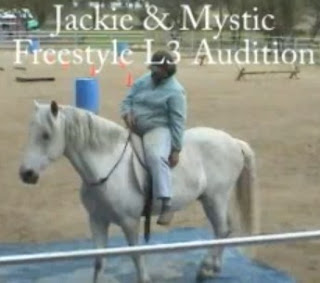 This is a Level 3 Parelli Natural Horsemanship video with a gaited horse, Paso Fino breed. It should be easy for the Icelandic Horses to attain this level of horsemanship.

Can you learn to train and ride a horse naturally?

A gal from Iceland sent this link, and follows is a response:

Yes, those are nice pictues. I think the challenge is not to ride bridleless for a little time to get photos, but to change the whole style of riding to be more friendly to the horse. In a video of the same rider, her horse is fighting the bit and showing displeasure in every gait. Hopefully, this will change for the better. Here is the video:

At the shows, she's got all The Gear -- boots, bits, significant contact, etc. -- but the irony is that because of her skill, she doesn't *need* that to get a decent, casual 4-beat "saddle rack". I'm not capable of getting that from Vafi at this point -- if I ride him casually and attempt "tolt", I end up with something much pacier. Laura claims I have to learn how to get him to use his butt... without the bit.

Here is the link:

http://www.youtube.com/watch?v=wxBQNKrgI30What does Laura say that this gait is?

"what gait does Laura say this is:
I haven't shown it to her, so I'm guessing here... unofficially, a "lazy-ass tolt". 2/3 support, 4 beats close to even on set-down. I believe that's the rough equivalent to a saddle rack. This is the kind of "tolt" we'd do in warm-up or circles or just cruising around on a trail.

When Vafi is excited, he brings this to the 1/2 support making it a "true" tolt/rack.

I understand and agree about groundwork as part of the relationship, but in Vafi's case -- that's my job. Laura rarely rides him-in the "casual tolt" video she'd jumped on him after taking him into a pond to cool off, and she was too lazy to walk back.

One thing I'm trying to do now with groundwork is to build the relationship while still keeping up the horse's spirit. The one thing both Laura & our Parelli trainer actually agreed on was that Bert & I had gotten really good at the "Level One quiet stuff" at the expense of the horse's pure enthusiasm.

So now I'm trying to rethink my approach to groundwork. Where I used to see disobedience in anything other than nice quiet responses, now I'm taking more to heart the Linda Parelli of "bringing up their life".

I'm only JUST starting with Vafi (Draumur returns from rehab in a month), so I don't have groundwork video, but I'm going to try to document a lot more of it, especially now while I'm still flailing around with it. Finally figured out easier ways to get video on YouTube, so I expect to make a lot more.

It would be good if the icelandic trainers would learn the components and definitions of different easy gaits, to be able to identify them. We'd be able to talk about them together on a better level.

Let's look at what the gait in the video is.

You mentioned it is a four-beat tolt. Every easy gait is four-beats, so that's something that doesn't help us in identifying the gait.

Does the horse have diagonal, lateral, or square timing?

The "lazy ass tolt" was my attempt at a joke, but as for the rest, yes -- in the "casual tolt" video he's doing a 2/3 support, *nearly* even on set down, and usually when we say "4-beat" amongst ourselves at the barn, we mean "mostly even".

I realize that we're not using well-understood or accepted terminology, but it's often useful shorthand within our own conversations -- we all understand "pacey" to mean 4-beats, not even, tending toward lateral (set-down) and "trotty" to mean the same but tending toward diagonal in set-down. I've never been in a discussion that made a distinction around pick-up, which seems to vary a lot depending on the horse -- 5-gaiters often seem to have a more lateral pick-up, but everything we do to "break up a pace or trot" seems to be focused on changing the beat/timing of set-down.

Whether it would be useful for us to focus on pick up as well... I don't know. I have my hands full just trying to listen to and feel the distinctions around the set down.

Oh, absolutely. You can't define a gait without considering it.

Maybe like a rainbow, and leaving out the red / orange area... it's not really a rainbow, is it?

Thanks, Kathy, for doing the video; it's really nice.

>Oh, absolutely. You can't define a gait without considering it. <

I'll rephrase that -- I should ask whether it's useful in helping *me* do better/improve *given my current (limited) skill*. I totally agree that it's very useful knowledge, but while it's within my capacity to look at it on a video (especially slowed down), it's not something I can CURRENTLY appreciate how--or whether--to do anything about it.

Right now, I'm at the level of being able to hear and usually feel the beats, and if they're uneven -- I make adjustments to try to find a sweet spot where it sounds/feels the most even. And that nearly always consists of asking the horse to come more from behind -- engaging the hind legs with more energy -- combined with suppling. In my highly simplified world, it seems like the 80/20 to go from less even to more even is to get the horse to move less stifly. And *that* means loosening up and using more energy behind.

When my horses are being tired and/or lazy -- no matter whether they're shuffling along very slowly or rushing/running -- that seems to be when the "EZ Gait" is at its least even. Asking for more energy and liveliness from behind, getting the shoulders to move freely, and getting the hind legs to reach actively... that seems to have a huge influence on the gait without actually trying to actively adjust the gait itself.

So, do I think it's important to understand the mechanics of the gait? Absolutely. But for my ability level, adjustments in the pick-up is simply a side-effect/artifact of other things I *can* affect (namely hind-end/energy), and not something I am thinking about directly. And by that metric, it is not useful for an instructor trainer to discuss pick-up with me when I have bigger fish to fry. But yes, I also think it's very interesting. That's why I got the "Ez Gaited Horses" book so long ago (and took Andi and Kara to a David Lichman "gaited horses naturally" clinic)

>>>Oh, absolutely. You can't define a gait without considering it. <

I'll rephrase that -- I should ask whether it's useful in helping *me* do better/improve *given my current (limited) skill*.<<

I think I was looking at the bigger picture and addressing the lack of knowledge of gaits on the part of the icelandic trainers, rather than you specifically.

Show Laura the video and ask her what gait the horse is doing, will you? and post her answer here?

You seem to never get pleased. The gal from Iceland probably can ride without bit, but the gait won't be as good without support. Therefore she's using a bit in the youtubevid because it is a competition or something..
It also depends on what sort of horse you have. According to your vids, you seem to have kinda lazy horses. If you have a horse that is completely hyperactive and hotheaded, it's harder to ride without a bit. It's easy for you to sit there and claim everybody should do it, the question is; Could YOU do it? I doubt it. If I gave you one of the hotheaded horses in my stable, you'd not be able to ride it bitless. You'd end up on the ground, over and over again. 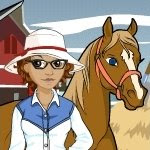